Ad blockers are programs that identify ads on a website and prevent them from appearing. It's important to be mindful of whether ad blockers are preventing impressions from being shown on your site and therefore diminishing your potential revenue.

How Do Ad Blockers Block?

While there are different ways ad blockers can identify ads, the most common is analyzing the page and identifying what 3rd party tags/codes are on it. These codes are then compared to a database of 'ad companies' - such as AdSense, OpenX, etc - and if there's a match, the blockers assume it's an ad and blocks it.

How Common are Ad Blockers?

Estimates are that ~25% of US desktop owners use ad blockers.

For US smartphone users, the number is lower - at 2%. Internationally, the smartphone ad blocker rate is higher - roughly 20%.

Are Native Ads Blocked by Blockers?

Yes and no. There are three main scenarios:

Are Clicks Blocked - Or Just Impressions?

If an impression is blocked by a blocker, the click will naturally also be blocked.

However, if an impression appears - maybe because you are doing server-to-server - the ad blocker may still block the click. In that case, the user would instead be taken to page that says it's blocked. Users are usually then given a chance whether to proceed or go back (here, if users click 'Temporarily' or 'Permanently') 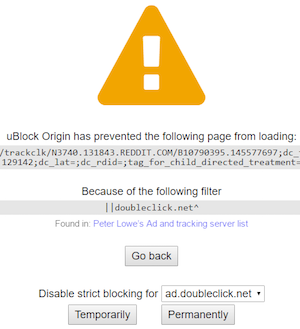 In this scenario, Kevel would still record a click. However, if a client is using 3rd party tracking, their system would NOT see a click.

Are Kevel Ads Affected by Blockers?

See below for help on how to minimize reporting issues.

To repeat: for Decision API ads, the Ad itself will NOT be blocked. The users will see it. However, the Kevel impression pixel - if placed directly on the page - may fail to fire, which will cause reporting discrepancies.