Passback ad serving offers a way to manage traffic across all of your third-party networks from one console.

With passbacks, you can monetize more of your inventory by enabling a third-party network to "pass" any impressions it chooses not to fill "back" to your Kevel account, where you can route the impression to a different network for another chance at monetization.

The Kevel implementation of passbacks cuts down on some of the latency and lost impressions associated with a decentralized chain of default creatives pointing to different networks.

If an impression makes it all the way through the passback bucket, and none of the networks choose to fill the impression, the impression will be passed back one more time and Kevel will look in your next lowest priority. In this example, let's suppose we have a flight of Google AdSense creatives set up at the House priority. This flight acts as a fall back and will fill all impressions that aren't picked up in the passback chain.

To create an adChain, you must set up the flights in the chain using an adChain-enabled priority. There are two types of adChain Priorities to choose from:

Enable AdChain for a Priority

The default 'Networks' priority is already set to "AdChain Ordered", so you do not have to create a new one if you don't want. 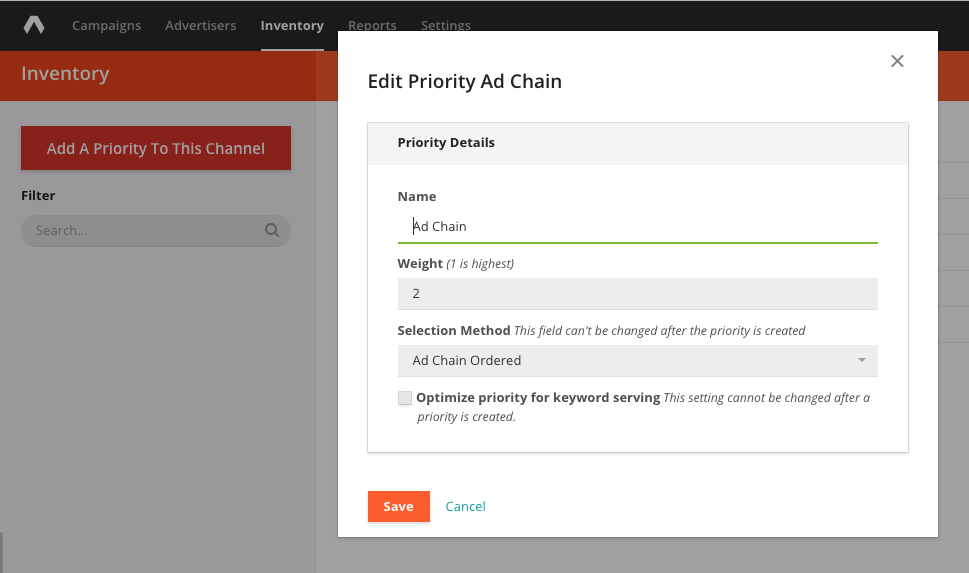 You are free to just put 0 as the Remainder Percentage. Some customers like to set this to 5%-10% to help remove flukes/noise, but it's up to you. 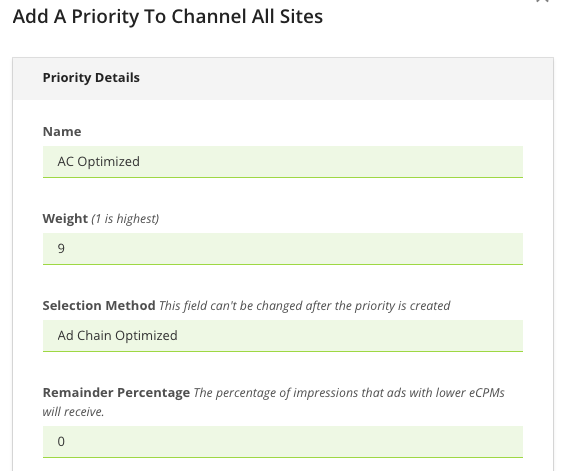 Once you set the selection method of a priority, you cannot set again. You will need to create a new priority to make changes.

If you are creating an adChain Optimized priority, you can check to "Enable Second Pricing", which will second price the impressions that are served in the chain. The Knowledge Base explains more about second pricing.

The default passback timeout (how long Kevel waits for a flight in an adChain to pass back before moving on to the next one) is 400ms. You can manually override the passback timeout for a priority using the Management API.

Set Up Flight Eligible for Passbacks

There are two ways:

AdChain Ordered will look like this, and you can reorder with the arrows on the right.

AdChain Optimized looks like this, and you can see the eCPM tied to each Flight.

Note that the adChain page displays both passback enabled and disabled flights. To enable or disable a flight for passbacks (i.e. make it active within the adChain), you will need to edit the flight on the flight settings page.

To enable passback codes that are able to handle passing back from multiple flights, you will need to make some minor changes to the passback code.

In the passbackToKevel(); function, add brackets inside the function to create an array. Then add the flightIds of the flights you want to pass back, separated by commas.

If your users are using slow internet connections, or if a third-party partner is taking longer than the default of 400ms to return an ad, the adChain may pass back an impression even though an ad is eligible to serve.

You can set a manual override of the timeout on the ad request level. Insert the function ados_setPassbackTimeout(); into your ad code with the timeout as the value. For example:

You can also override the timeout on an adChain priority using the Management API.

You can view an ad candidate list (a list of all eligible creatives for a given request) using a combination of adChain and a Decision API request. This will show you a list of the possible creatives that could serve given their targeting criteria, such as geo-targeting, custom targeting, etc.

You can use adChain to serve ads in a sequence (i.e. with each page refresh, the next ad in a chosen order will display.)

There are several limitations:

The adChain priority you use must have a higher priority setting than any other priorities serving ads to the eligible placements. Otherwise, an ad from the higher priority may interrupt the sequence.

You must serve the ads in an environment where frequency capping is available.

In some cases, an adChain request may return a blank ad, which is sign that the third- party provider has failed to render an ad or signal to Kevel to load the next flight in the adChain.

There are two general causes for why third-parties fail to pass back:

1. The adChain code is unable to break out of an iframe due to the same origin policy.

A typical example is when a third-party provider renders the adChain code in an iframe. The adChain code needs to access ados.js (present in the Kevel code on the page) to continue the passback process, but the same-origin policy prevents the third-party iframe from getting access to the parent page.

This error will sometimes cause the text of the adChain code to be displayed in the placement instead of an ad or a blank.

2. The adChain code is expecting a different <div> id than the Kevel <div> id present on the page.

The adChain code needs access to the Kevel <div> while the impression is passed back and the ad is served. If the <div> id becomes obscured, changed, or if another Kevel <div> renders inside it (in the case of passing back to another Kevel account), then the adChain will break.

To resolve this issue, do not pass back to other Kevel accounts. Make sure that the <div> id is consistent during the time the adChain requests ads and renders them, e.g. don't let CSS interfere with it.

Loading flightId XXXX: adChain has made a request to the third-party and is waiting for a response.

Received passback for flight XXXX: The third-party has declined to serve an ad, either by returning the adChain code or through a timeout. The next ad in the chain will attempt to serve.

Writing pixel for flightId XXXX: The third-party has returned an ad and the impression counting pixel has been written to the page. The ad chain now stops.

If there are errors with adChain, an error message will be written:

Uncaught Security Error: This indicates the same-origin error above. Use the alternate passback method for the third-party that generated the error.

Uncaught Exception Error: This indicates that adChain is unable to access the Kevel div. See the explanation above.

The following code snippet (see below, between //BEGIN CODE SNIPPET and //END CODE SNIPPET) can be pasted into the <head></head> of a site running ados.js.

This snippet logs to the "Debug" tab of the Chrome console some useful information about the passback chain, as events are received. You'll find the div ID, flight ID, advertiser ID of the flight, and the time elapsed (in milliseconds) between the most recent passback event and the one before it.

Updated about 1 year ago